It's nearing the end of week 2 of the Spring Clean Challenge at CFNZ and our flat is in full swing of clean eating.

The first week we had a minor blowout of the budget which I'll post up a vid about soon. But this week we have been able to come well under budget.

What I'm learning more and more is that leftovers go a long way.

We were in the kitchen this morning and were going to make some sort of an egg scramble thingy with some left over roast pork from last night when it came to me: Palos Ranchos!

This is my spin on the Mexican dish Huevos rancheros.

It's super simple to make and tastes awesome.

Basically you can throw in any leftovers and veggies you have lying around. There is never a strict ingredients list! Just make sure you get some spices in there to jazz it up.


Put a pan on high heat and drop a couple of knobs of butter into it.

Slice up your onion and drop into pan.

Cut up your leftover meat or bacon and add to the pan. 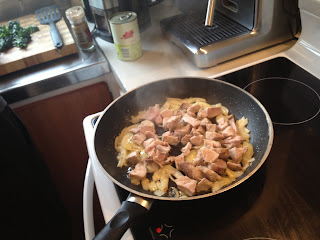 Let that fry away. Season with salt and pepper.

Add your dried spices and crush up the coriander seeds and then add to the pan also. 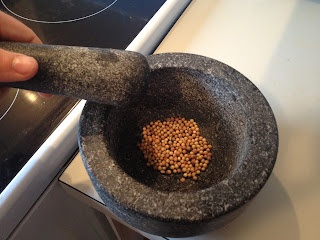 Give it all a really good stir.

Slice up your silver beet or spinach and then after a couple of minutes add that to the pan. 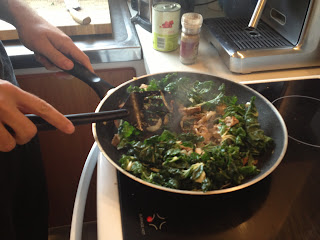 Give it all a good stir and let it fry for a few minutes.

Then add 2 cans of crushed tomatoes to the mix. For those on a budget we are using Pam's tinned toms as they are only 99 cents a can from Pak n Save. 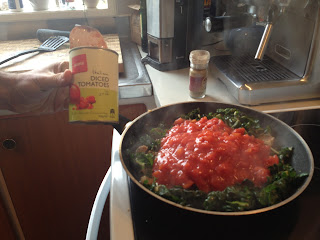 Give that as good stir and turn the heat down to a medium heat and let the mixture come up to a good simmer.

Then crack your eggs over the top of the mixture in different spots on the pan. 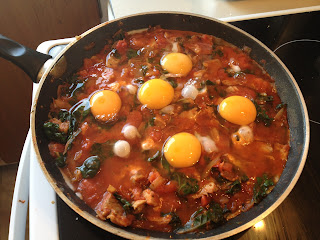 Put a lid on the mixture and let it simmer away for about 5 mins. Depending on how you like your eggs done you can leave it on the stove for longer or less. You choose! 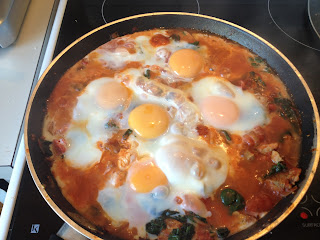 Enjoy.
Posted by Atalay Pala at 09:45 No comments: 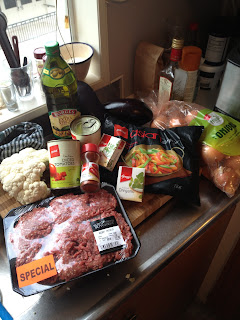 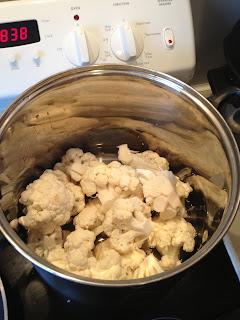 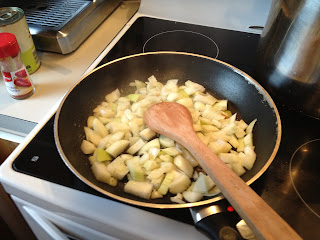 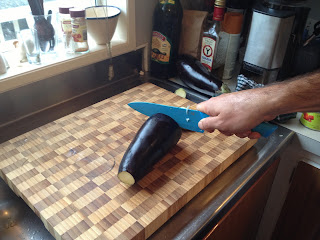 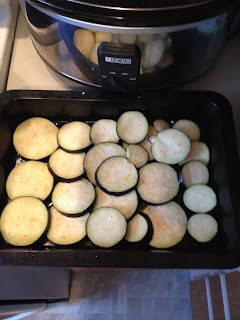 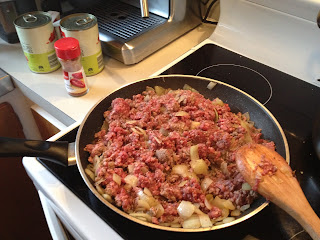 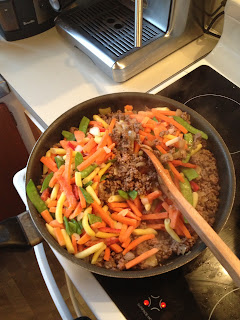 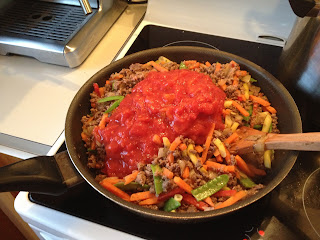 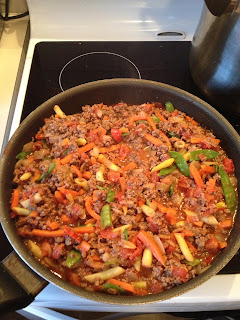 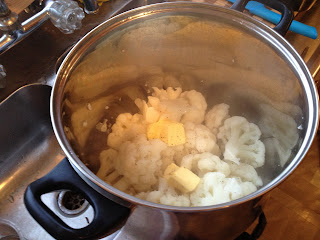 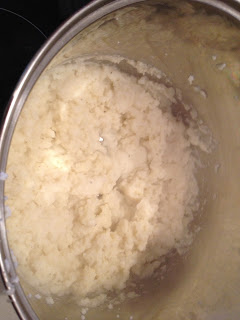 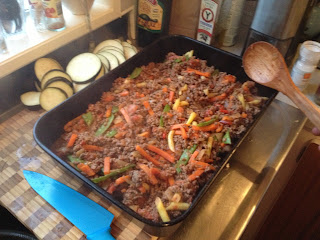 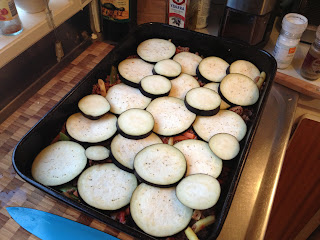 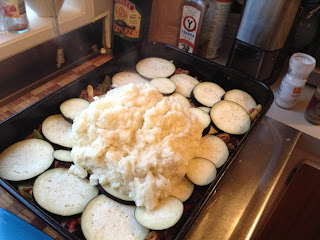 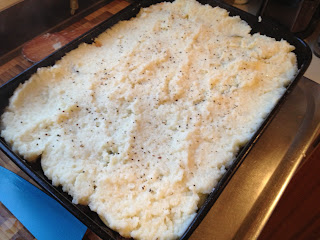 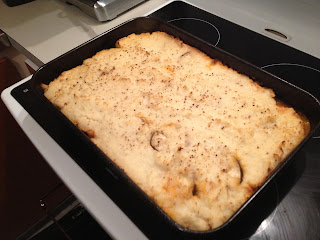 So I thought since we are trying to buy all this amazing good food on a budget that I would post up here our shopping lists for each week.

I've done a lot of driving around to different veggie stores and supermarkets over the last couple of months to find the best deals on meat and veg.

I'm all for supporting local establishments like butchers. Especially if they are well priced and have good quality meat.

The guys at Saint Johns Butchery are awesome. Their address is 113 Felton Matthew Ave, St Johns.

They always have amazing cuts of meat and are always doing specials that match what you could get at supermarkets or other cheap butchers.

Here's what out meat bill looked like for the week. Remember that this will feed four hungry mouths for the week. 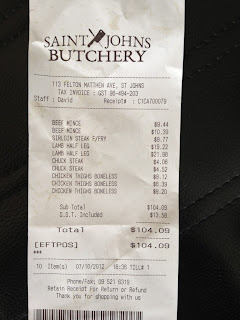 Try to buy meat that is cheap at the time. Lamb at the moment is ridiculously cheap and roasting them up for dinner with veg makes the leftovers a great lunch for the next day.

Here's the food bill from Pak'n Save: 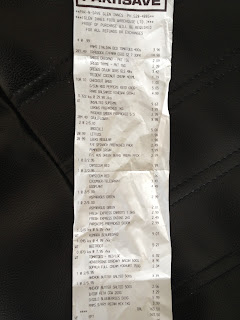 Pak'n Save really is cheaper than the other supermarket chains. Overall they seem to be just that little bit less expensive than other places.

I've found that they also do some really good deals on veggies. Better than some of those stand alone veggie stores dotted around the place. We went in there on this shop and pretty much just bought what was on special (and therefore in season!).

If you know of any other veggie stores around Auckland that are better priced please post to comments below!!

So the combined supermarket and butcher shop came to $268.4 for 4 us for the week. That comes in under our budget of $300 a week for the four people. With the leftover money we have each week we will put aside and see how much we can save over the course of the challenge!

At the gym we have kicked off on the annual spring clean challenge.

For roughly 8 weeks we will all be trying to eat as cleanly as possible while adhering to a paleo/primal nutrition plan. And of course getting into the gym and training our butts off!

For this years challenge Kristy and I have decided that we will be keeping to a tight-ish budget for our food and drink bill each week.

After a little bit of research online about what the average income in NZ is and what would be the lowest average incomes in NZ, we decided to set the task of only spending $75 a week per person on food and drink.

This equates to just under $11 a day per person. Doesn't sound like much but we are hoping to show that it is more than enough. Too many times people say to me "It's far too expensive to eat healthily and to eat the way that you do". After this challenge we will try to prove all the nay sayers wrong!

Below is a quick video showing the food that we bought for the first week. Seeing as there are four of us at the flat, everyone has agreed to the $75 limit a week. So for four people for the week we have $300 to spend on food.


So stay tuned for some new recipes and a few videos to show you all the awesome things you can make on a budget!
Posted by Atalay Pala at 21:44 No comments: