It's been far too long since my last post.

The funny thing with primal eating is that I find myself cooking the same meals quite frequently. When you are on to a meal that tastes awesome and works, why not eat it often?

Over the last couple of months I've found that I've been eating pretty much everything I have posted here previously on a regular basis.

The food is tasty and easy to make and especially over the winter months all you want to have is something easy. I've been eating a lot of roasts. Turn the oven on and put the food in and wait. Can't really mess that one up now!

I spent a little time in America with the lovely Kristy just recently and the trip away to the states taught me (as it always does) that there ain't nothing like a home cooked meal made with fresh NZ produce. We are pretty lucky here to be able to buy quality meat and veg freely from wherever you shop.

So here's something I made a few nights ago. 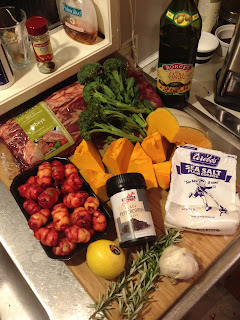 Chop the pumpkin into medium cubes. In a roasting tray add the cut up pumpkin and yams.

Strip the rosemary off the stalks and add to the pumpkin and yams. Drizzle generously with olive oil. Season also with salt and pepper.

Pop the pumpkin and yams into the oven. 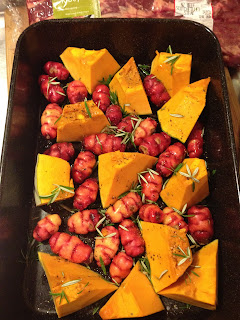 Now grab a mortar and pestle and add to it a generous handful of the peppercorns.

Also add a generous handful of the sea salt.

Pound the salt and pepper until you break up all the peppercorns. Add to this now the garlic cloves peeled.

Smoosh and pound it all together in the mortar until all the garlic is mixed in.

What we are doing here is making a rub to go all over the meat. 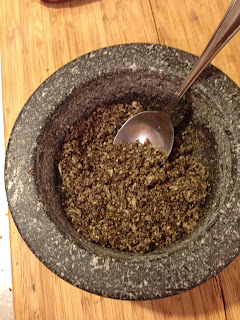 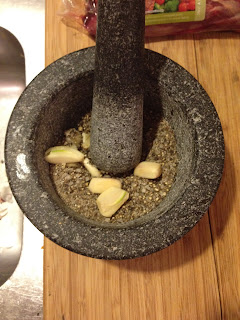 Now it's time to rub the pepper mixture all over the meat. Ideally you want your meat to be room temperature, so pull it out of the fridge a couple of hours before you are going to start to cook. All good if you don't have the time for this however.

On a board you want to spread the pepper mixture out nice and evenly.

Try and cover an area that is just big enough for you to roll your meat through. 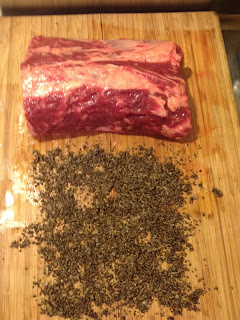 Then go ahead and roll the meat through the rub and cover the meat entirely. 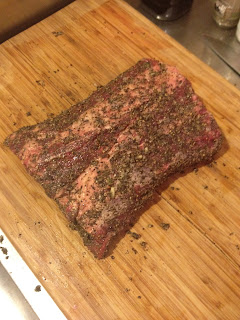 Now put a frying pan, that is able to go in the oven also, on a high heat.

If you don't own a pan that can also go in the oven then that's no problem you will just have to transfer the meat to a small roasting dish before you put it in the oven.

Once the pan is nice and hot add a small amount of olive oil.

Add the meat to the frying pan and what you want to do is sear the meat on all sides. Don't forget the ends of the meat also. 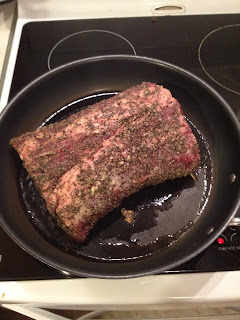 Once the meat has been seared then pop it in the oven.

Depending on the size of your roast the cooking time will vary slightly but for my piece here, which was almost the width of a standard frying pan, I cooked it in the oven for 30 minutes.

If you like medium rare to rare then you won't go wrong for leaving it in there around the 30 minute mark.

After the 30 minutes is up pull the meat out of the oven. (Also a good time now to give the pumpkin and yams a good stir.)

Transfer the meat to another dish and cover with foil.

This is what mine looked like coming out of the oven: 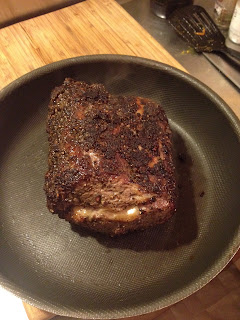 Now you have to be strict on yourself here.

Let the meat rest for at least 20MINS. That's right I said 20 mins.

The longer you let the meat rest the better. Plus you need that time for the pumpkin and yams to finish cooking.

Once the 20 mins is up roughly on allowing the meat to rest it's time to cook the broccolini.

Put a pan on high heat and add some olive oil. Drop in the broccolini and also now add the juice of the lemon and season with salt and pepper.

Put a lid on the pan if possible and fry the broccolini for about 3 to 5 mins. 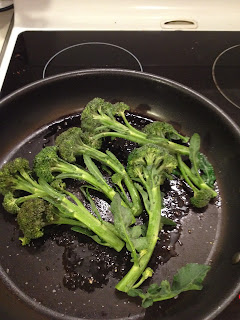 While the broccolini is cooking you can slice up your scotch fillet. 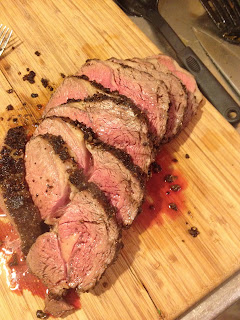 Now time to plate up!

Pull the pumpkin and yams out of the oven.

Assemble a few slices of your meat and some of each of the veggies on your plate and enjoy!

The salt, pepper and garlic crust on the meat should be enough seasoning! 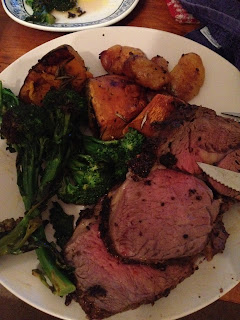