If I have the time I will pretty much always make a cooked breakfast.

But sometimes I wake up and just can't be bothered. I'm sure we all feel like that every now and then!
This is a cold breakfast that takes about 2 mins to throw together.

The yoghurt I use can be found in most supermarkets and is the cheapest, most non-messed with yoghurt I can find. When I say, "non-messed with", I mean it hasn't had extra sugar or preservatives added to it to make it taste sweeter or last longer. It's just straight milk and culture.

I sometimes eat this dish for dessert as well!


Here's a pic of the Yoghurt I use: 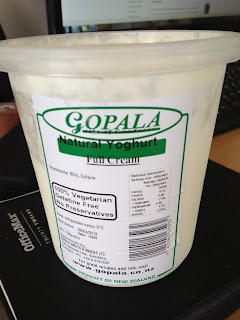 And no people I don't just buy this one just because of the name!!!

This is the Maple Syrup that I use: 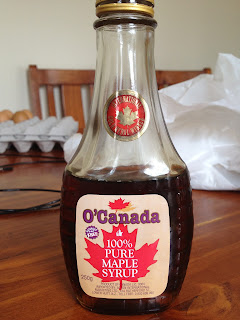 In a bowl drop in the Frozen Blueberries and slice up the banana into there as well. 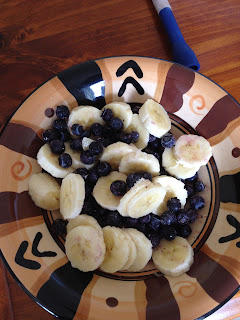 Cover with the Yoghurt, Walnuts and Sliced Almonds.

Then drizzle over the maple syrup. 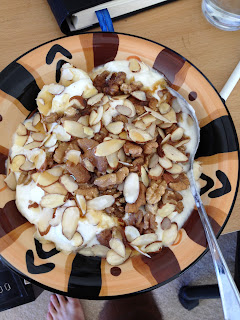 I just ate this one for breakfast and was a little unsure about how it would end up tasting but it came out right in the end.

Isn't cooking supposed to be about experimenting every now and then?

I think it should be. Sometimes you bomb out and make something even a walrus wouldn't eat. But sometimes you end up making something that is amazing and you didn't even know you had it in you!

Moral of the story: Get in the kitchen and give it a crack. 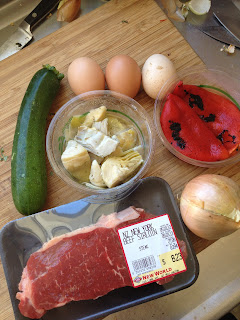 I just bought a small pot of Marinated Artichokes from the deli section of the supermarket and also the smoked peppers from the same place.

Put a frying pan on a high heat and add a big knob of butter.

Slice up the onion and add to the pan.

While that's frying slice up the steak into strips.

Add the steak to the pan.

Season now with some salt and pepper. 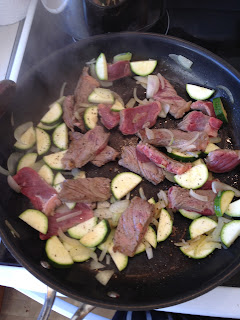 Fry away for a few minutes and while that's happening chop up the artichokes and smoked peppers.

Add the artichokes and peppers to the pan and give it a good stir. 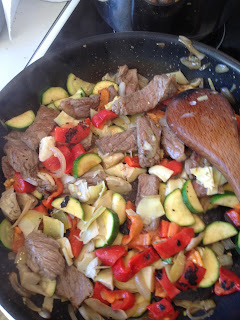 Crack the eggs into a bowl and whisk up with a fork.

Then add the eggs to the pan and stir every now and then until cooked.

Season with a little salt and generously with the pepper. 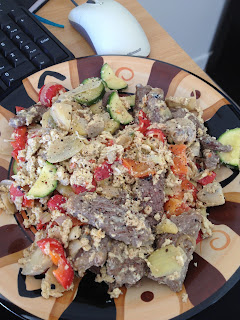 Roast Chicken with Pumpkin and Broccoli

It's been a while since I've been able to post something up here. Work has been crazy busy and subsequently I've been lacking enthusiasm to get in the kitchen! That doesn't mean that I stop eating primal it just means that I buy a lot more food out and about.

I'll post up something here soon with a few of the places I go to around the city to get a nice primal meal.

But for now here's another recipe for a nice roast. Once again took me about 10 mins to prepare which gave me the time to sit back and catch a nap on the couch while I waited for it to cook! 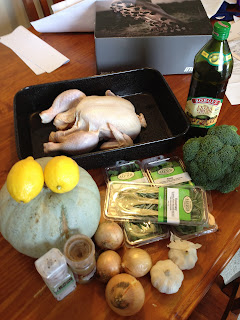 First thing you do is turn your oven on to max heat.

Now time to prepare the chook.

With the breast side up you want to separate the skin away from the breast with your fingers nice and carefully. There is a little sinew that you will need to break through down the middle. Try not to rip the skin.

You are trying to make a pocket between the skin and breast so you can slide up in there some sliced lemon and the herbs. 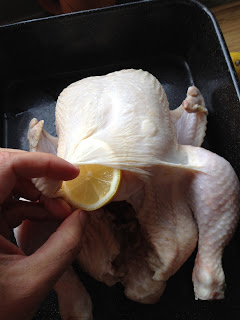 Slice up one of the lemons and slide that into the pocket you have made.

Then also ram in there the fresh basil and marjoram. 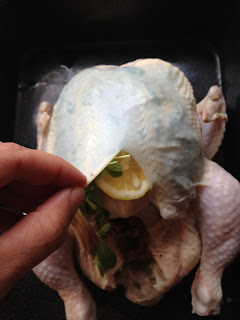 Then cut the other lemon into wedges and put them into the cavity of the chicken. Also put in there a couple of sprigs of rosemary.

You then want to cross the legs of the chicken over and if you have some kitchen string or butchers twine, you want to tie the legs up together to make a neat package to hold all of the stuff in the cavity in.

I didn't have any string so I used some skewers we had and poked them through the legs as in the pic. If you don't have skewers you could use a couple of rosemary stalks. 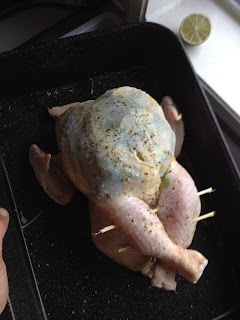 Also drizzle some of the olive oil over the chicken and season generously with salt and pepper.

Cut up the pumpkin. Leave the skin on.

Roughly cut up the onion. Also don't peel them. They are going to sit under the chicken and hold the chicken off the bottom of the pan.

Place the onions in the middle of a roasting tray and place the chicken on top of the onions.

Drop in the cut pumpkin around the chicken.

Break up the garlic bulb into cloves. No need to peel and drop them in and around the pumpkin. 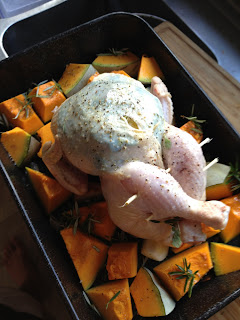 Place in the oven and immediately turn the heat down to 200°C.

Cook for about 1 hour 20 mins or until the juices in the chicken runs clear.

When you have about 10 mins to go on the chicken put an inch of water in a pot and put on a high heat.

Chop up the broccoli head into florets and place in the pot with a lid on.

Steam away until the broccoli is soft. 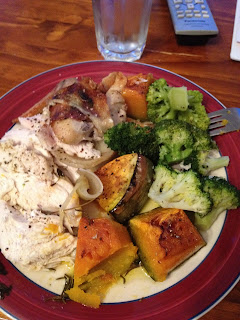