Each year when I went to Turkey growing up this is the dish that I would always end up eating first.

When we got to Turkey we would be really jet lagged and have to sleep straight away and I would always wake up to the smell of this dish filling the apartment in Istanbul.

Dad would have been cooking this for us to eat when we woke up. Little did he know it was primal!

It's again a one pot wonder and easy to make. 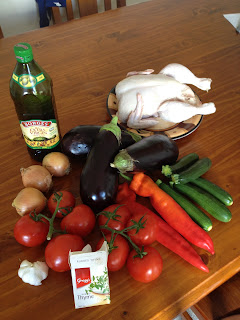 First thing is about half an hour before you are ready to start to prepare the meal you want to slice up the eggplant and salt it.

So slice the eggplant into roughly 1cm thick slices.

Arrange the slices of eggplant in a big bowl and at each layer salt the heck out of them.

Put to one side and leave for half an hour. This will draw out a blackish liquid from the eggplant and make it taste far nicer at the end. 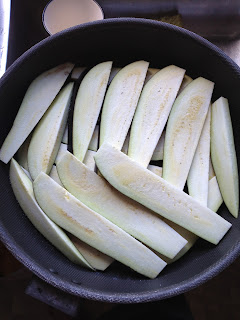 Next step is to take your whole chicken and break it down into pieces. All you need is a big ass sharp knife to make the job easier. I always use a whole chook but if you want to you can just use chicken pieces such as legs.

I've take pictures of the step by steps you should take to break down the chicken so hopefully it is easy to replicate.

First you want to take the legs of the chicken off. Basically pull the leg away from the body of the chicken and cut around where the thigh meets the body. 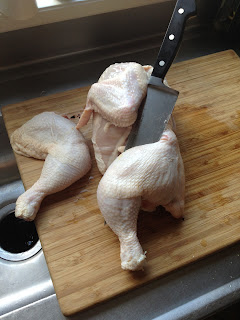 Then cut the wings off where they meet the body. 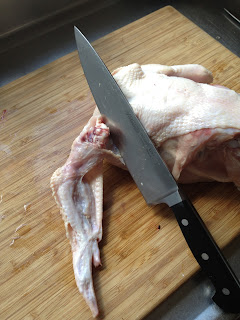 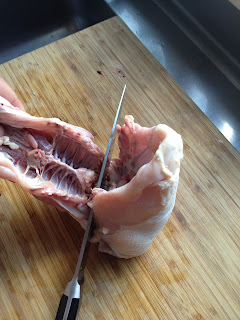 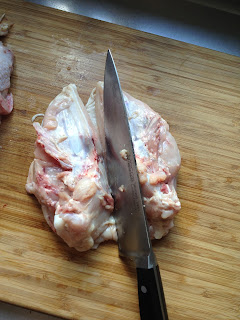 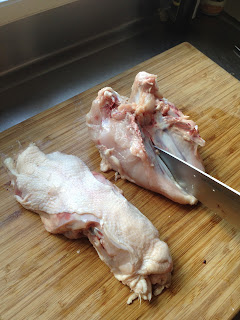 And there you have all of your chicken pieces ready for the dish! 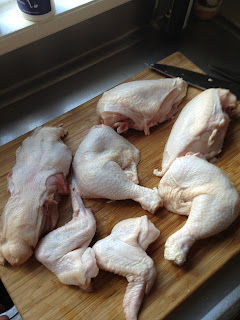 I didn't use the carcass part for the dish because my frying pan wasn't big enough to hold it but you can keep it for a homemade chicken stock.

Next is to take your deep dish frying pan and cover the base of it with lots of the olive oil.

Then slice up the onion and cover the base in one layer. 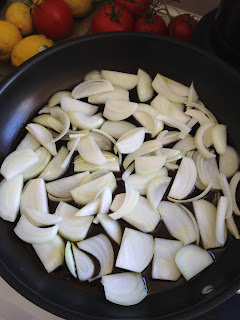 Then slice up the Tomato and cover the onion in one layer. 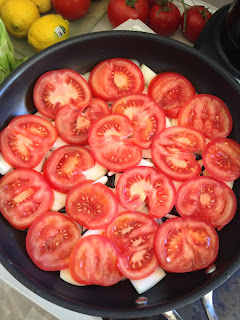 Then slice up the garlic and sweet peppers and courgettes and layer each on top next. 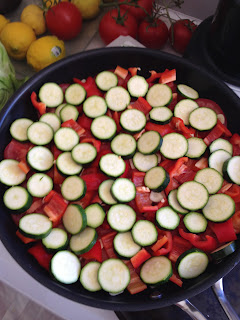 Take the eggplant now and under a cold running tap wash off the salt and squeeze it really hard to get rid of most of the water. Then layer it next onto the veggies. 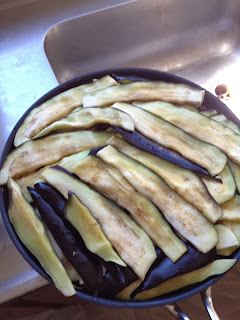 Next place the chicken pieces over the eggplant. Generously sprinkle the dried thyme all over and season well with salt and pepper. 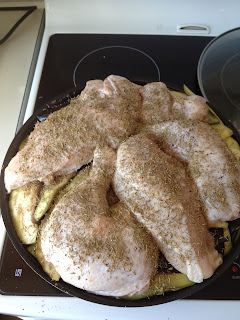 Place the pan on a high heat for 15 mins then put a lid on and turn the heat right down and let it simmer for at least 45 mins. 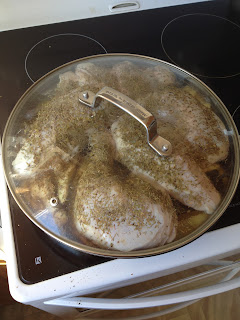 Keep an eye on it as there will be a lot of liquid that comes out of this one. Mine always simmers over and drops a bit of juice on the oven top. If that starts to happen you can take the lid and with it still on the pan just move it off to one side so you can let more of the steam escape but you don't want to fully remove the lid.

I served this one with my tomato, cucumber and red onion salad. Was delish!! 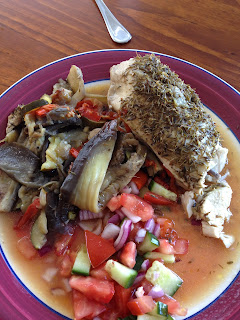