I love cooking dishes like this one as all you need is one big ass frying pan with a lid and you're away laughing.

In the past every time I've cooked dishes with mince in them, they have usually been for a bolagnese sauce to go on the top of pasta. So since I don't eat pasta anymore I thought I can still make the mince topping but just add a bunch of veggies to it to punch it out.

This one came out really nice and not to spicy, as I'm not a huge fan of spicy foods, but you can make it as spicy as you like by adding more chili. 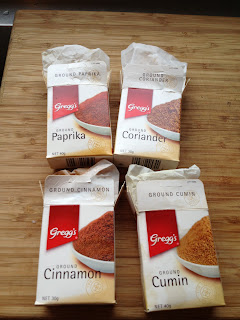 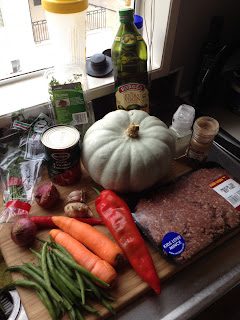 First thing to do is finely chop the onion, garlic and peeled ginger and add to a large frying pan on a high heat. Add a couple of swigs of the olive oil.

Also slice the red chili in half and take the seeds out and finely slice and add to the pan. If you want it spicy leave the seeds in and add two chilis. 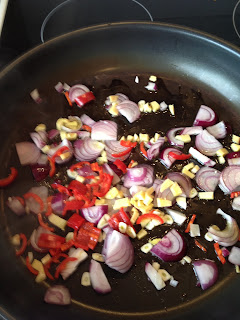 While that's frying away take the pumpkin and cut the skin off it using a sharp knife.

Then cut the pumpkin into smallish sized cubes. 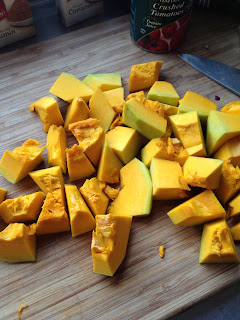 Take a bowl large enough to hold all the pumpkin and also one that can go in the microwave. Drop the pumpkin in the bowl, add a splash of water and put a lid on the bowl. I just use a plate big enough to cover the bowl.

Then put in the microwave on high for 5 mins.

Now it will be time to add the mince to the pan. Drop it in there and give it a good stir breaking it all up. 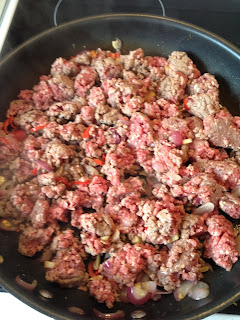 Once the mince has had a good stir now it's time to add the spices.

Throw in the Paprika, Coriander, Cumin and Cinnamon. And the fresh Thyme.

Also add 2 good pinches of salt and a few twists of black pepper. 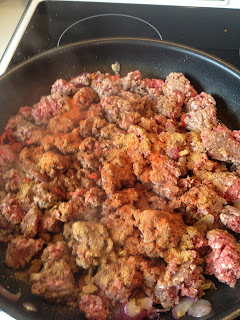 Give it a good stir.

When the 5 minutes is up on the pumpkin take it out, (it will be hot!), give it a stir or a little shake and put back in microwave for another 5 mins. If at this point you think it only needs another couple of minutes then only put it in for that. The idea is to get it to a point where a knife runs through it easily.

Chop up the carrot into really small cubes and add to the frying pan and stir. No need to peel the carrot. 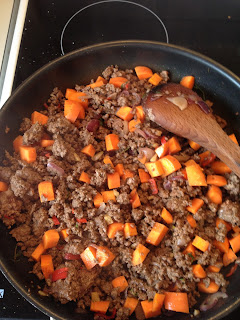 Take the ends off the beans and cut in half. De-seed the red pepper and roughly chop.

Add the beans and pepper to the pan and stir. 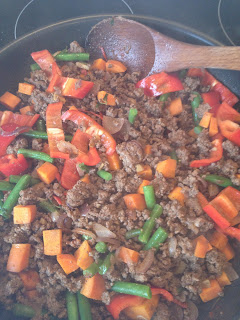 Add the two cans of chopped tomatoes to the mince mixture and mix in.

Then add the pumpkin from the microwave and stir in carefully 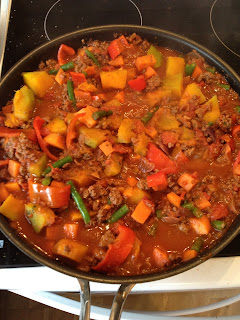 Turn the heat down now so it simmers away with a lid on and leave for about 30 mins.

Then serve it up in a large bowl and add chopped parsley.

Season with salt and pepper to taste. 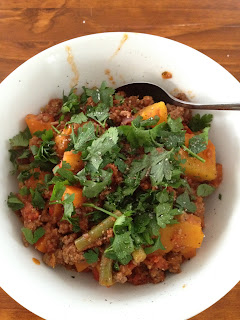