Spiced Meatballs with Eggplant and Tomato

I've just finished eating this one and it was delicious! It was a bit of an experiment but it turned out to be pretty tasty!

First things first I want to say that a lot of people find getting into the kitchen a real hassle and it feels like a chore for them.

The key for me is music.

I always put my favourite music on when I'm cooking in the kitchen. This makes it enjoyable for me to be there and in a way makes cooking fun. So try it out. Pour yourself a glass of red or a tequila on the rocks with lime if you're that way inclined, put on some music you enjoy and get cooking.

Todays recipe is a combination of a couple of dishes. The eggplant in the tomato mixture is an old Turkish entree style salad that can be eaten just on its own if desired.

And the meatballs can be cooked and put into any dish that you want to have meatballs in.

But combined together they are great. 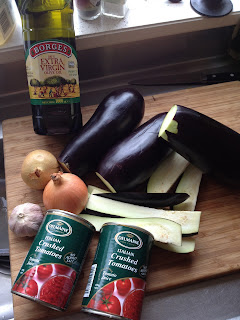 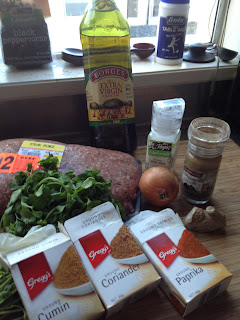 This Recipe is a little time consuming. Takes about an hour to prepare.

First thing you want to do is cut the eggplant into strips. The Turks will always now salt their eggplant and leave it for about 30 mins. This draws out some moisture from the eggplant which looks like a black liquid. I always salt the eggplant. If you don't the flavour will not be as tasty at the end. So take the time and layer the eggplant in a dish, (or you can just do it in the kitchen sink), and each layer, pour a whole bunch of salt on the eggplant. Use lots of salt. More than you think you need. Try and do this about 30mins prior to getting ready to start cooking. 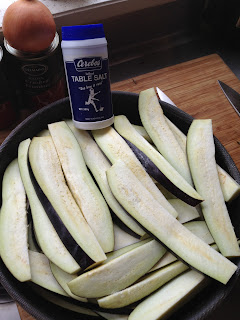 After about 30 mins the moisture would have be drawn out of the eggplant as in the pic below. Run a cold tap and wash off the salt from the eggplant. Wring the eggplant dry (be quite firm with it, it won't break apart) and put in a roasting tray. 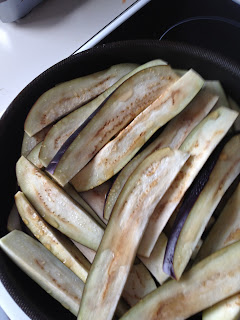 Once all the eggplant is in the roasting tray pour over a whole bunch of the Olive Oil. About 5 or 6 TBS and mix it all up and put in the oven.

Now time to prepare the meatballs. Finely chop the onion, ginger and fresh coriander. Put all the meatball ingredients in a bowl and mix together with your clean hands. Really get in there and make sure all the spices, onion etc are mixed in well. Be sure to season with the salt and pepper. 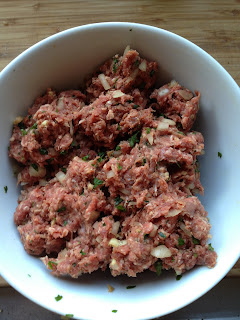 Divide the mixture up into smallish sized meatballs and put in a dish. Cover the dish with gladwrap and put in the fridge.

Now's a good time to check on the eggplant in the oven and give it a stir if need be. You don't want it to start burning on the bottom of the pan. 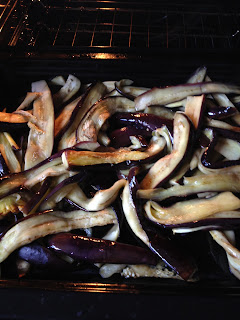 Time to start on the Tomato mixture. Put a pan on high heat and add a little bit of olive oil.

Slice up the onion and garlic and add to pan. Cook for about 5 mins or until the onion softens. Then add the 2 cans of crushed Tomatoes. Add a little bit of water to one of the cans and pour the water into the pan. Bring to the boil then turn heat down and let the mixture simmer and put on a lid. 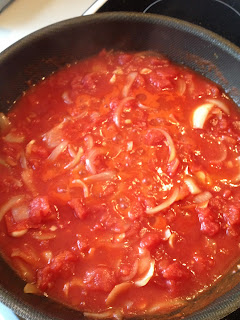 Let the tomato mixture simmer away for about 30 mins. All the while checking on the eggplant in the oven and stir it around if need be. If you think the Tomato mixture is looking runny then take the lid off. Which is what I had to do.

When you have about 10mins left to go on the simmering Tomato mixture then its time to cook the meatballs. 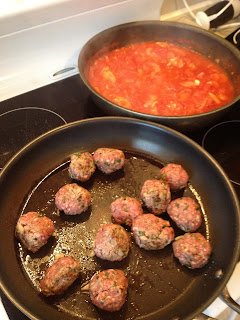 I got sick of waiting for the first batch of meatballs to cook through so I turned the second batch into meat 'patties' so they would cook faster. Remember there are no rules with cooking! 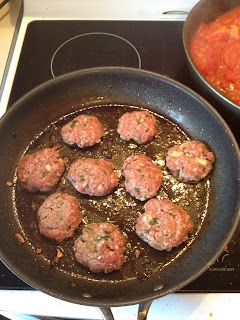 Once all the meatballs are cooked take the eggplant out of the oven and add to the pan of Tomato mixture and mix. If you want you can put some of this tomato eggplant mixture in a bowl and let it cool then put in fridge and leave overnight and you will have a classic Turkish salad. This on its own is delicious. 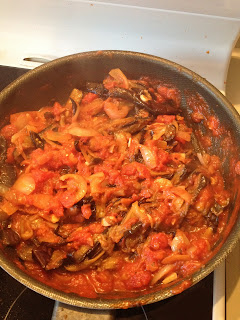 Now it's ready to eat! Put some of the eggplant mixture on a plate and top it off with some of the meatballs. Season with salt and pepper. 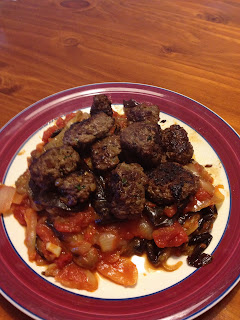