Lamb with Vegetables and Roast Kumara

On my previous post I did a roast lamb leg. This dish was made using some of the left over lamb and some veges with lots of herbs.

This was really quick to throw together. Took about 30 mins all up. 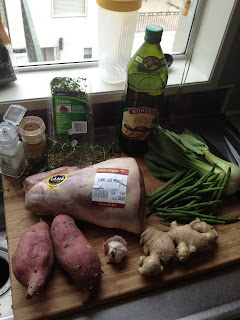 First thing is to get the Kumara into the oven for roasting. Turn on your oven to 220°C.

Now from the post before on the roast leg of lamb I said to keep the lamb fat that was left in the bottom of the pan. What I actually did is I just left that roasting tray in the oven overnight and didn't clean it. Shock horror! And then I used the tray for the roast kumara for this dish.

So when I turned on the oven to heat it up I left the tray in the oven and the lamb fat in the tray melted away nicely ready for my kumara.

Cut up your kumara into smallish cubes. No need to peel.

Take the leaves of rosemary off the sprigs. Peel and roughly chop 2 of the garlic cloves.

Drop the kumara, rosemary and garlic into the roasting tray and season with salt and pepper. Mix it all up with the melted lamb fat and pop back in the oven. It should take about 30 mins to cook. 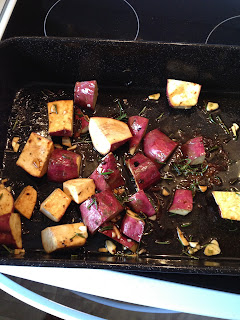 Take your cooked leg of lamb and cut off as much as you would like to eat: 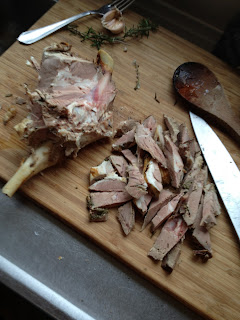 Slice up your onion and drop in a frying pan.

Peel the ginger and finely slice and add to pan.

Cut your chili in half and take out the seeds and white pith and add to pan.

Peel and finely slice 2 garlic cloves and add to pan.

Add a knob of butter to pan then turn it on to a high heat. 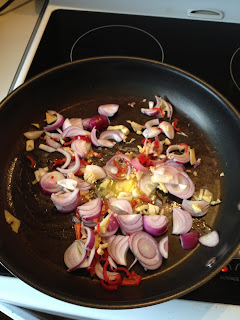 Once you can start to smell the flavours of the onion and garlic and they have softened a bit throw in the cut up lamb and mix.

While that is cooking away you want to cut up your green beans, bok choy, red pepper, coriander and thyme so you can get it ready to throw in the pan. Take the ends off the beans and cut in half. Take the bottom off the bok choy and roughly chop. Cut up the coriander, stalks and all. Take the seeds out of the pepper and roughly chop. Take the leaves of thyme off the stalk. 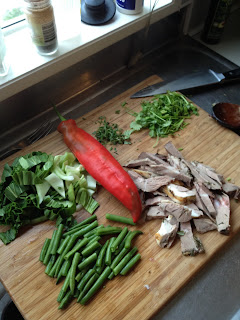 Drop the red pepper into the pan and stir: 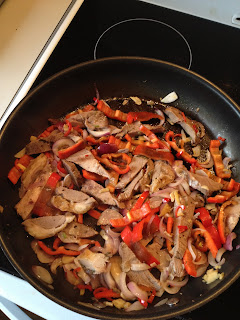 Make sure while you are doing this to have a look in the oven and give the kumara a good stir every now and then.

After a couple of minutes drop in the green beans and bok choy and stir.

After another couple of minutes drop in the thyme and coriander and stir.

At this stage add the juice of 1 lemon and stir. 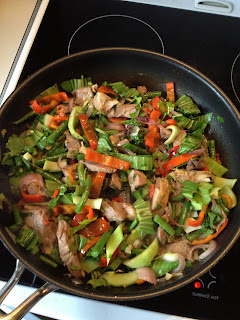 Stir for another few minutes then it's ready to serve! Place some of the lamb and veges on a plate and the take the roast kumara out of the oven and add to the plate. Season with salt and pepper. 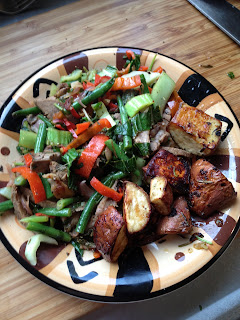 This one is really fragrant and got some awesome flavours. The kumara goes really well with lamb and veg.