Some of you may know that I love going to the states. When I'm there I love eating buffalo wings. Which is just simply  chicken nibbles in hot sauce.

The only place in Auckland that you can eat proper buffalo wings that taste just like they do in the states is from Dos Amigos Mexican Cantina in mission bay. I highly recommend this place. They also do amazing ribs! (Which I'll do a post on, some time in the near future!)

I was getting sick of paying for the wings and thought I'd try and make them myself.

I did some research and found out that the sauce they use is simply a bottled sauce from a brand name called 'franks' which they get from the states.

Believe it or not all the ingredients in the Franks hot sauce are primal! So I looked to see if anyone in Auckland sold this bottle of buffalo wing gold.

One place does. It's called Martha's Backyard. Address is 114 Lunn Ave, Mt Wellington.

This place sells a whole bunch of American foods and sauces and clothes. Anything American that you can't get here she will get it in from the states for you.

So I got me a bottle of the Franks Original Cayenne Pepper Hot Sauce and went home immediately to make my wings. 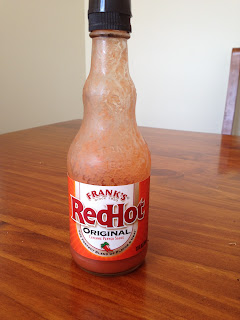 To make the wings I got about 1 to 1.5kg of chicken nibbles form the butcher and popped them in the oven on a high heat for about 30 mins. Turn every so often to get them golden brown all over.

For the sauce all you need to do is melt 1/3 cup of butter in the microwave then add 1/2 cup of the Frank's hot sauce to the melted butter.

Once your wings are cooked put in a bowl and pour the sauce over and toss, and that's it my friends. 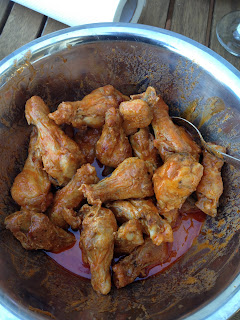 If you don't want to cook that many wings then just decrease the amount of sauce and butter to go over them.

These ones tasted like the real deal. Stoked!
Posted by Atalay Pala at 21:27